In early Spring 2006, I was 22 years old, finishing up my senior year of college and working part time as a paralegal/legal assistant for a family law attorney. I was getting ready to graduate from ASU and was a few weeks away from finding out I had gotten into law school, also at ASU, from where I would ultimately graduate with my law degree three years later.

I was also planning my wedding.

Having met when I was 16, my now-husband and I started dating when I was 17 and a senior in high school.  He was a freshman in college when we met, a sophomore when we became a couple. We were introduced by a mutual friend – a friend of mine from high school whom he met when they were living in the same coed dorm at ASU. He took me to my senior prom; I wore a white strapless organza ball gown with black embroidered lilies down the front. Some of my friends told me it looked like a wedding dress.

We got engaged on July 10, 2004, my parents’ 22nd wedding anniversary and my grandparent-like great aunt and uncle’s 50th. I was about to start my junior year of college; he had graduated in May. We soon set a date for May 2006. I’d be 22, he would be 24. In theory, my parents were totally against the idea of me getting married so young. They both had been married around that age and both marriages ended in divorce (before they married each other in their 30s). Knowing that I wanted to go to law school, they were concerned I’d lose sight of my goal. That I’d get so wrapped up in playing house that I’d somehow decide to delay it or simply not go. But we had a plan, him and I. We’d get married, I’d finish law school, and we’d enjoy our DINK (dual income no kids) life before starting a family. My parents knew him well enough to know he’d support me, not hold me back, encourage me, not let me settle. They gave him their blessing.

I was at a basketball game with my then-boss and a client-turned-friend a couple of months before our wedding. While the crowd and I cheered a basket, I somehow overheard the friend ask my boss, “Do we think she’s ready?”  I pretended not to hear. I knew what she meant. Marriage is hard and the odds were against us from the start. We were so young, I was still in school, he was just starting out in his career, I planned to be a divorce lawyer.

Will they survive the ups and downs of life without having lived much of it yet?

Will they grow WITH each other or AWAY from each other as time passes?

Will she get jaded from her job and walk away?

Will he meet someone at work, outside the bubble of their shared group of friends?

Will they get tired of each other?

Will they make it?

My husband and I have been together for nearly 19 years.  At 36-years-old, that means we’ve been together for just over half of my entire life. In May, we will celebrate our 14th wedding anniversary. In those 14 years we’ve accomplished: my law degree, his Masters’ degree, three jobs for me, several promotions within his same company for him, one apartment, two homes, five vehicles, one cat, two dogs, and our two amazing daughters. We’ve seen: three presidents, one recession, one burst real estate bubble, one global pandemic, two work furloughs, one lay off, one near-burst appendix, one miscarriage, one near-death roll over car accident, and the deaths of our two remaining grandparents.

I know not everyone “makes it.”  I practiced family law for 8 years as an attorney and worked in the field for a total of 14. I’ve untied dozens of knots. But we have “made it.” We have more than “made it.” We have created. We have created a life we love.  We have grown with each other into two different yet wholly compatible people. We aren’t the 22 and 24-year-old kids who got married on a late-May day in 2006. We are the late-30-somethings with a family and a future we are proud of. Something we built together.

So to my husband on our 14th wedding anniversary, I love you. I choose you. Thank you for being my perfect partner and an amazing father. I don’t know whether we were really ready back then, and I don’t know if anyone else is ever really ready for the ups and downs of marriage regardless of their age when they walk down the aisle. But we figured it out. And we’ll keep figuring it out one year, one day, at a time. 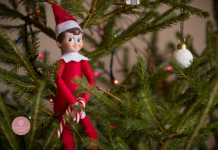 Holiday Traditions: The Elf on the Shelf 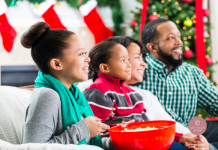