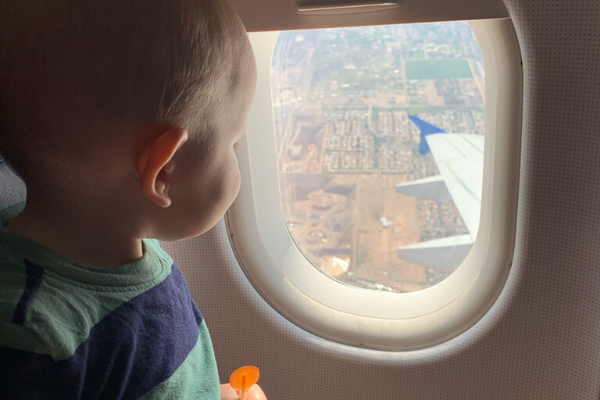 I’ve heard so many stories (good and bad) about air travel with toddlers. So, when we took Maverick on his first flight this summer, I tried to be ready for anything. And I fully acknowledge that the actual flight time is a struggle no matter how many snacks and toys a mom can cram into her carry on.

Just a few weeks before our family flight, I had flown solo up to Washington to visit an old college girlfriend, and the two experiences were vastly different—my solo flight was almost relaxing (and I got so much laptop work done!) while flying with Maverick was an all-hands-on-deck three hour marathon.

Before our flight I was talking to literally every parent I could to crowdsource as many hacks to make his first air travel experience as smooth and enjoyable for everyone involved, and I hope some of these hacks help your next flight! 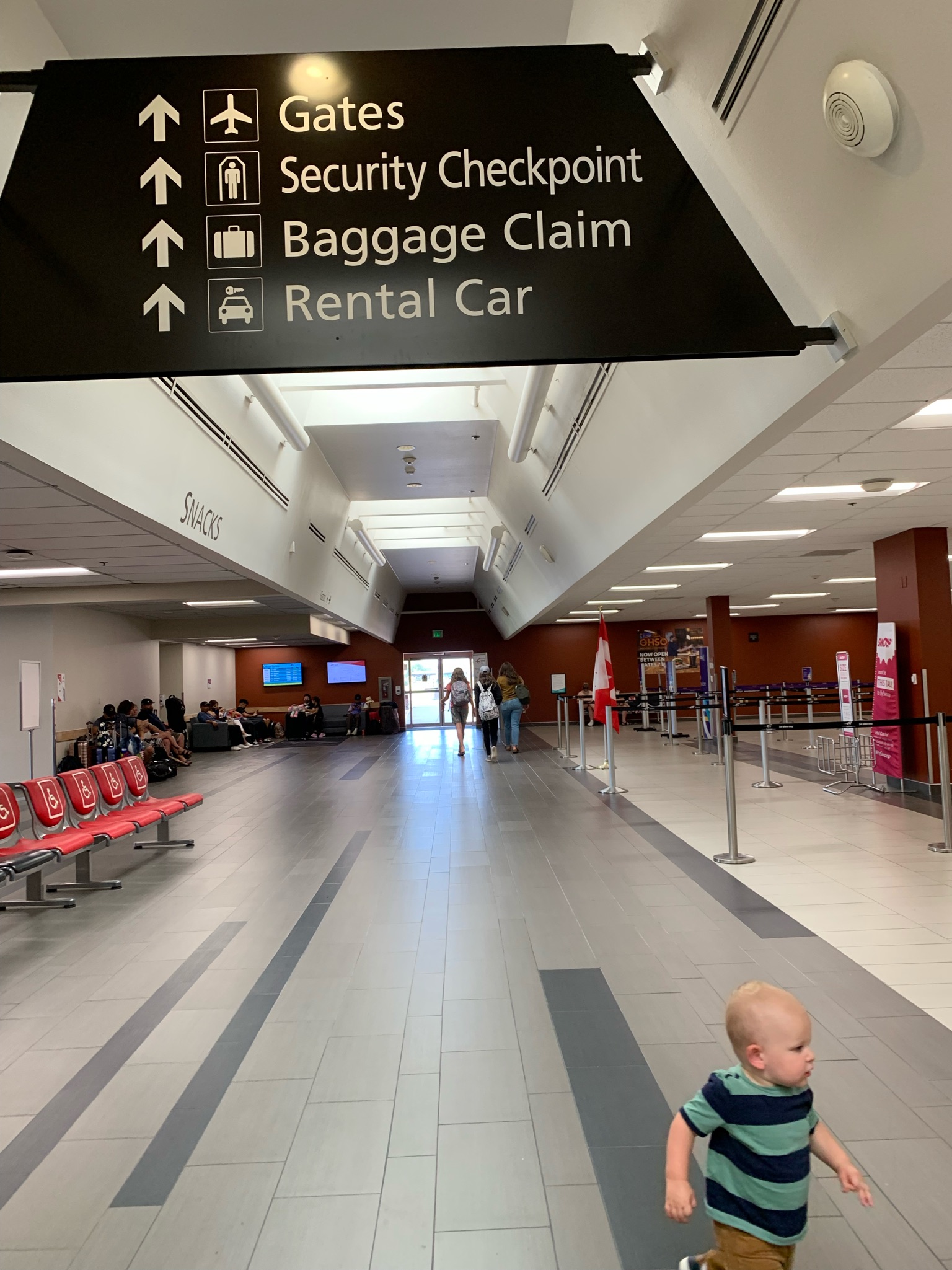 We flew out of Gateway Airport in northeast Mesa specifically for Maverick. Navigating a smaller terminal was much easier than a larger airport with multiple terminals where everything is farther away from each other.

Larger terminals can be over stimulating for little ones, which for my guy, can mean overtired and cranky, so Gateway Airport was a strategic choice for a quick and easy flow from arrival to departure.

Speaking of arrival, parking at Gateway Airport is affordable for families as well, compared to other airports, so that’s a small cost savings as well when planning a large family trip.

We utilized the covered parking and took the free shuttle to the terminal. It took less than 20 minutes to park, wait for a shuttle and ride it to the departures area.

We also chose to fly into a smaller airport at our destination so that there would be less car time than if we had flown into a major international airport and had to drive hours to get to our friend’s small town. When we landed, it was a 30-minute drive from the South Bend Airport instead of a 1.5 hour drive from the larger hub airport.

(This was also the case when I recently went to Washington solo to visit my college friend, flying into Paine Field saved two hours of drive time versus flying into Seattle!)

Gateway Airport connects to more than 50 destinations and has five different carriers that fly out of the airport, so it may be a similar situation for your vacation destination! You can find airline, destination and terminal information here.

2. Board at the very last minute 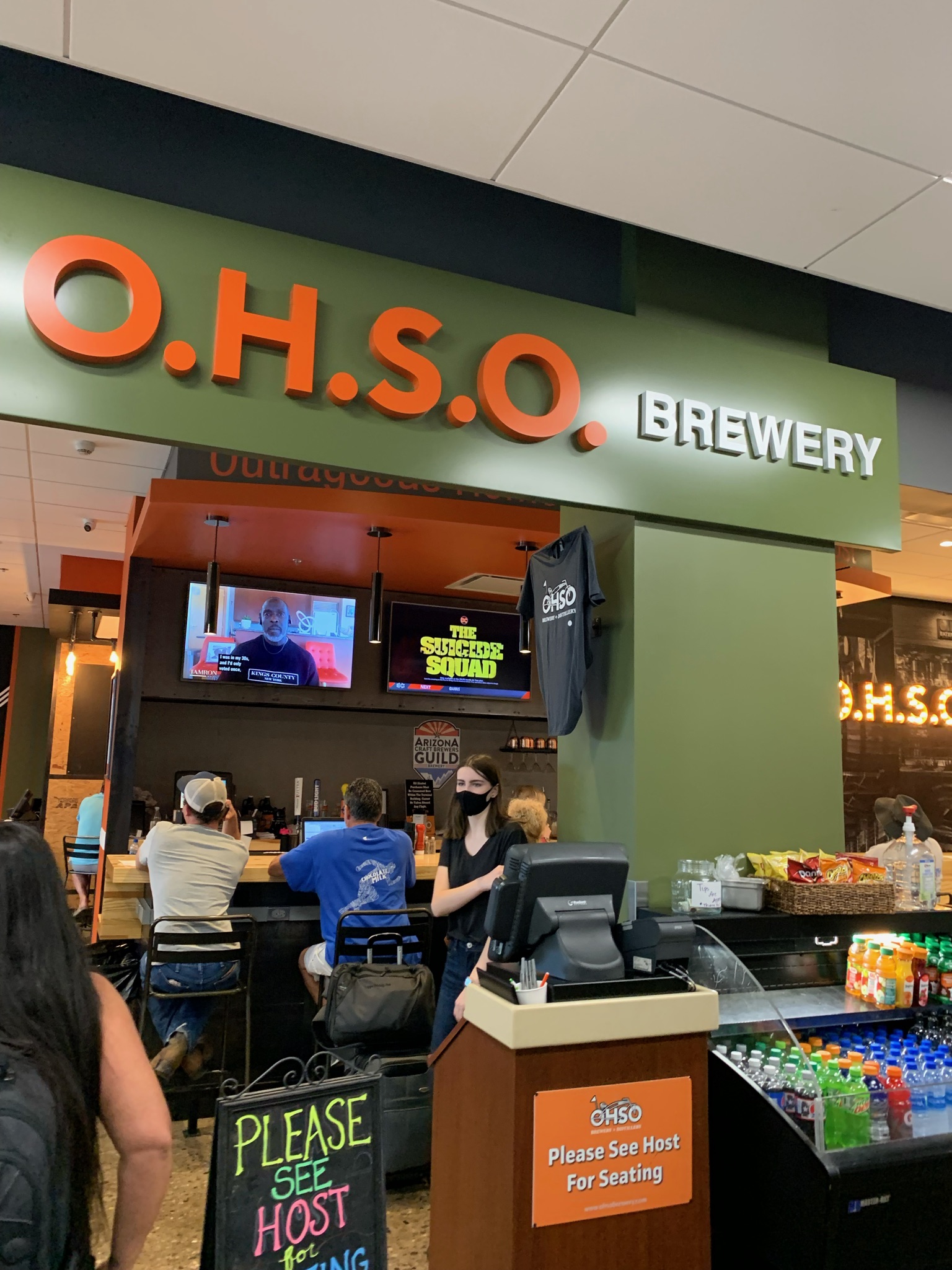 Gateway Airport has two outdoor courtyards past TSA security—talk about a win for air travel with toddlers —I’ve never seen this in another airport and it’s so neat (for adults, too!).

Maverick ran around in the courtyard as much as possible before we even headed to our gate (which was maybe 50 feet away).

Many flights offer early family boarding, but I chose to wait until the very last minute to board (we checked most of our luggage so didn’t have a lot of carry on bags to juggle). It can take so long for passengers to load onto planes, this cut down our seat time by a good 20-30 minutes by lingering at the gate and getting our final wiggles out.

While Maverick ran around, I sipped a Hefeweizen beer from OHSO Brewery. Not only does Gateway Airport have local dining at the airport, but they allow passengers to bring it to the gate. (Perfect to keep Maverick moving instead of sitting at the restaurant!) 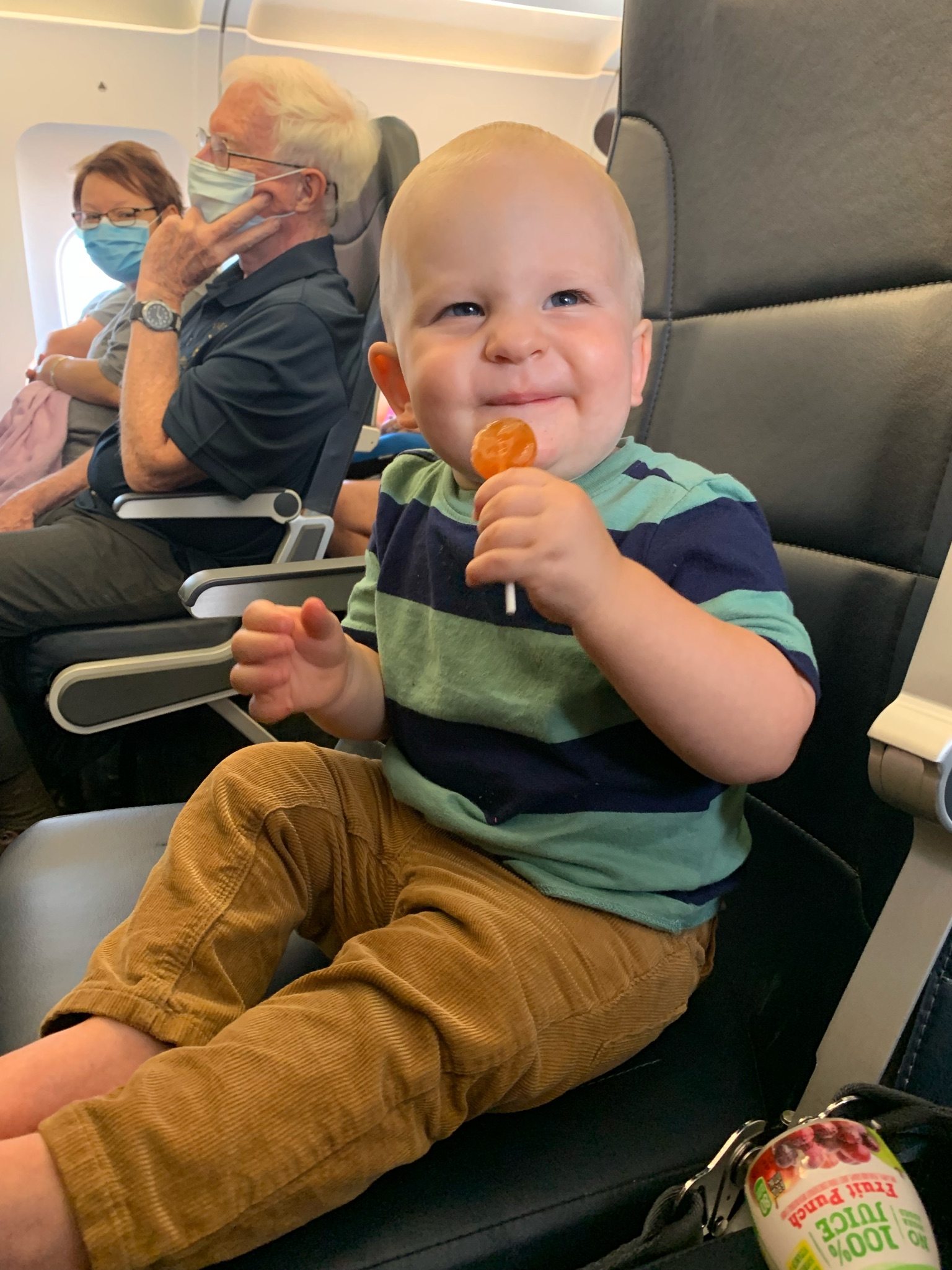 Contributor Megan had recently flown solo (while pregnant) with her two-year-old to Dallas, so when I was sourcing tips and advice, she was one of my initial go-to’s, and per usual, she had sage advice: Air travel with toddlers is all about survival; rules go out the window, just make it to the destination however you have to.

Megan’s advice allowed me to proactively give myself grace as a mom in this travel experience that I knew would be a challenge.

With her advice, I boarded the plane with zero expectations on myself as it related to the number of lollipops Maverick had, how many episodes of Bluey we watched and how many crumbs we may have left behind.

When our arrival flight landed, a mom of two teens in the row behind us popped her head over the seat to remind me that I was doing a great job as a mom. So remember, many passengers have been in your shoes before, and most of them won’t be jerks about your toddler being a toddler on a flight. 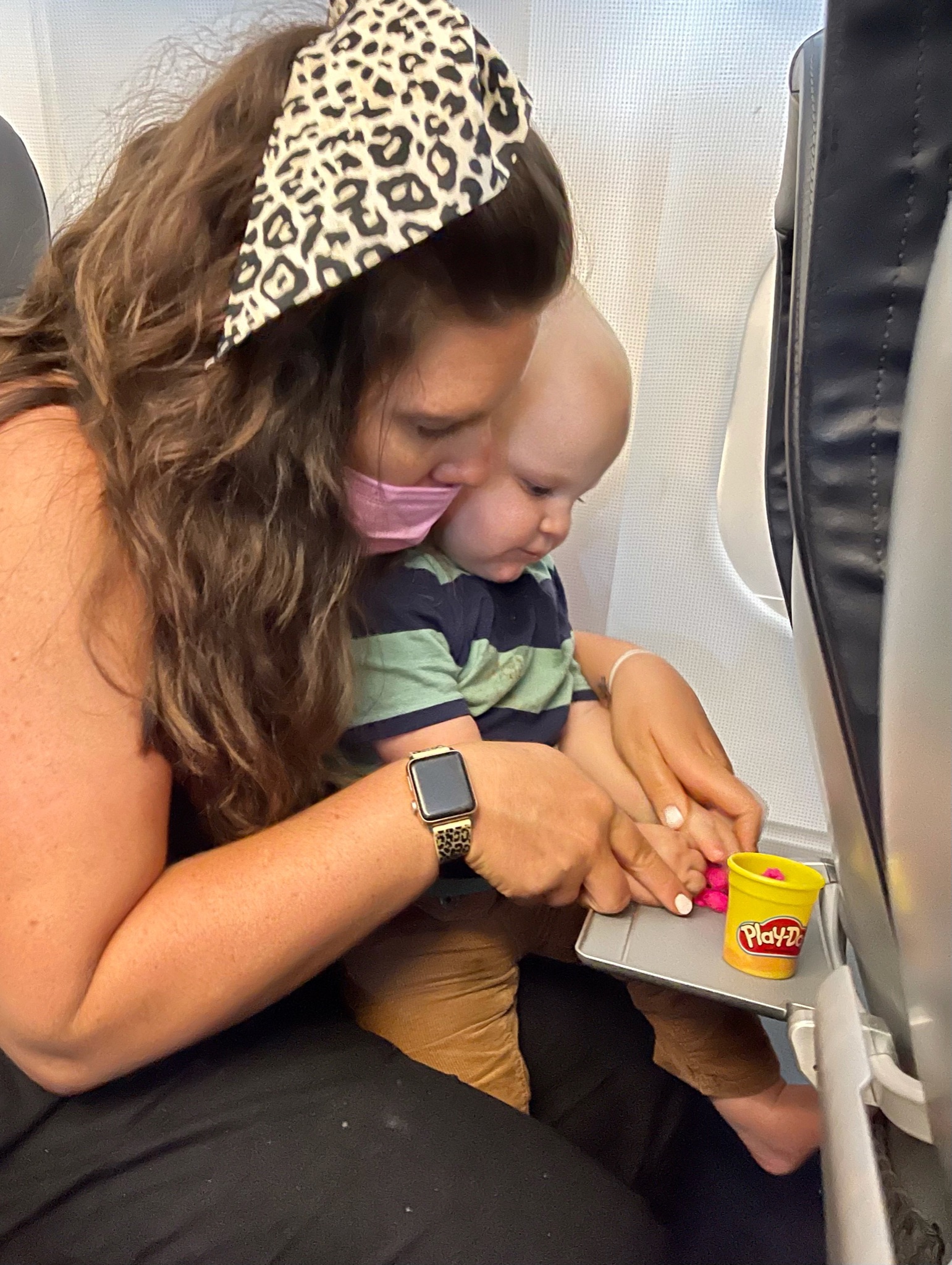 A three-hour flight is a long time to fill sitting with Maverick and every minute of entertainment counts.

I riffed off this idea from BusyToddler: I wrapped each toy and activity in gift wrap to add a bonus activity. Maverick had to unwrap each toy before he could play with it, creating two activities for each actual toy.

And the other mess-free/small space toys we already had:

5. Freeze half bottles of milk/juice

This tip came from a mama friend of mine who is a pilot herself!

To have cold beverages for the full flight for your kiddo, freeze half of the bottle the night before. TSA will have to test it with a safety strip, but it was a quick and painless process!

This works for any beverage, because Maverick doesn’t drink milk, I did it with his apple juice and when we were flagged in the TSA line, they simply asked to test it.

Instead of Maverick’s usual sippy cup, I brought one of the Good2Grow character juice bottles to get him excited to drink during the takeoff to help his ears pop. (They’re also spill proof.)

6. Use a stroller sparingly

The friends we were visiting had a stroller waiting for us, so I didn’t bring a stroller at all, and honestly, didn’t miss it.

It can be tempting to wrangle a wiggly toddler in the airport while waiting through TSA and checking bags, but I let Mav work out as many wiggles as possible in hopes he’d be slightly less antsy on the plane and it helped.

Gateway Airport’s terminal was very clean for Maverick to explore and interact with other passengers. He was especially a fan of pushing around the trolly carts passengers can use for pushing luggage. (Hey, easy entertainment!) 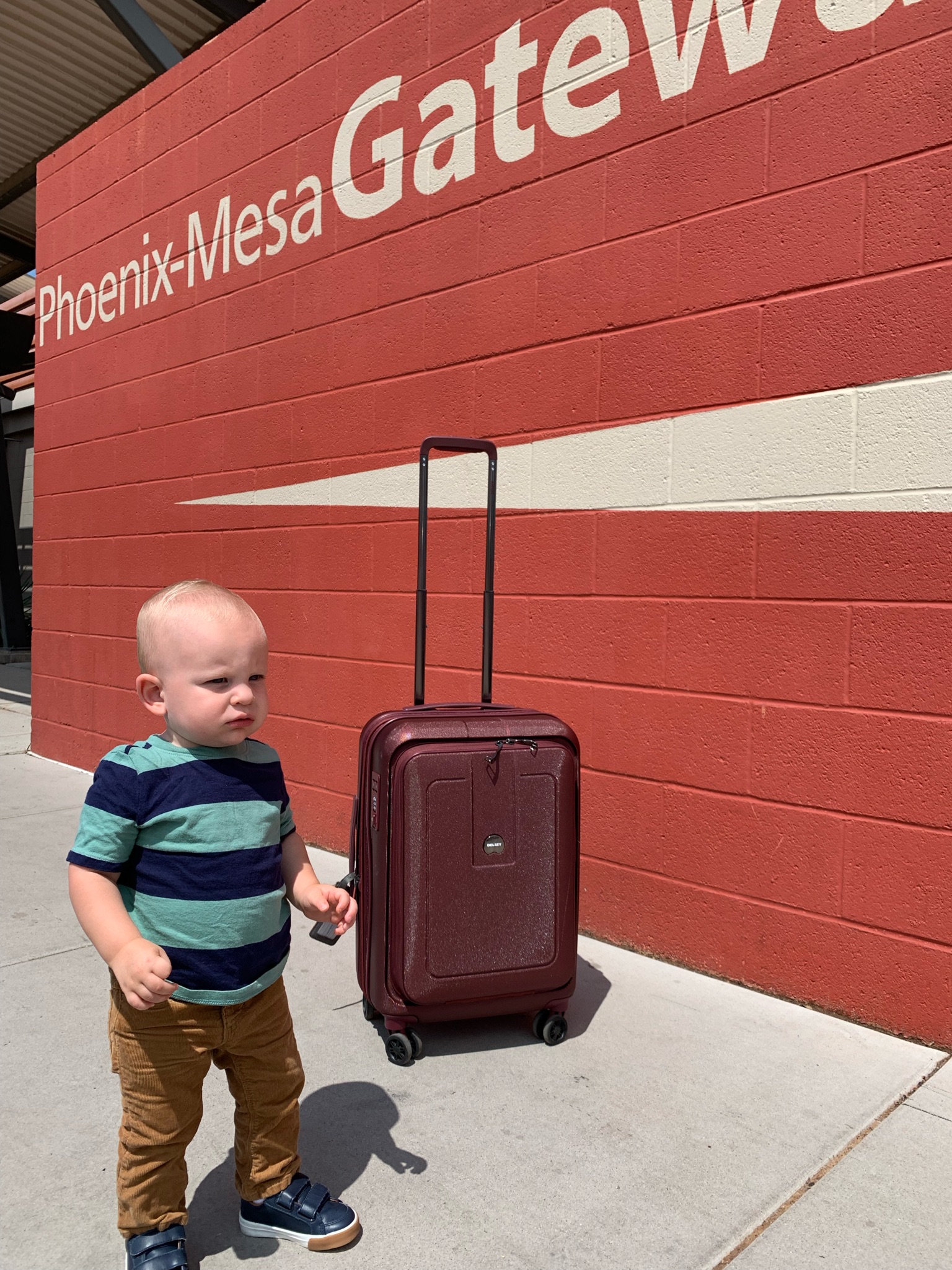 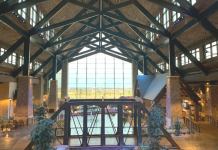 Exploring Colorado: 8 Reasons to Plan a Family Trip to the Gaylord Rockies 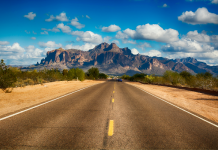 10 Tips for Road Trip Survival from a Mom of Four 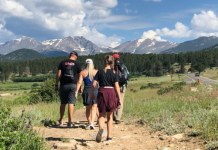 Exploring Colorado: Family Camp Vibes at the YMCA of the Rockies

Kristen Anstey - August 18, 2021 0
Celebrating a child's birthday is something that we all tend to lean into, over-spend and over-plan. We just want it to be their best day...